The Voluntary Carbon Markets were boosted by the news that the credit rating giant Moody’s would invest further in an extensive carbon offsetting programme. The company plans to have retroactively offset all greenhouse gases emitted by the firm from 2000 up to 2018 by 2040. In addition, they will procure all its electricity from clean sources by the end of 2020, up from 11% currently. Moody’s chief financial officer Mark Kaye said the latest goals were a “key business objective”.

The company have secured approval from the Science Based Targets Initiative for the use of carbon offsets as part of its wider emission reduction strategy.

Science based targets are a set of goals developed by a business to provide it with a clear route to reduce greenhouse gas emissions. An emissions reduction target is defined as ‘science based’ if it is developed in line with the scale of reductions required to keep global warming below 2°C from pre-industrial levels. The initiative allows carbon offsets to be considered as part of a wider strategy of carbon neutrality or net zero, a step beyond the organisation’s science-based target. 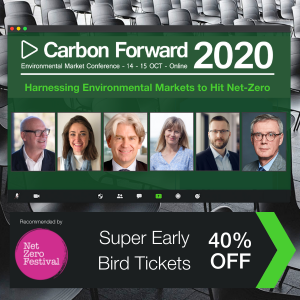